The convenience of ridesharing services has made companies like Uber and Lyft as essential to daily life as the morning cup of coffee. Whether you take an Uber every day to work, use Lyft occasionally when you’re on vacation, or drive for both companies to make some money, ridesharing doesn’t look like it’s disappearing anytime soon. Due to the sudden popularity of these companies, they are constantly recruiting new drivers to their existing fleets. However, with the ever-increasing number of drivers, these companies will probably require some sort of fleet management software to ensure their drivers can be tracked. Thanks to companies like Lytx, these ridesharing fleets can improve their safety and increase their visibility. This ensures the management can keep an eye on every car going out to pick up a customer. Whilst it’s great that these ridesharing companies are constantly growing, what about their carbon footprint?

Lyft announced it was going carbon-neutral in April 2018 by purchasing carbon credits from 3Degrees. But is planting trees really going to solve the climate crisis? A far more effective strategy would be to eliminate emissions, not offset them.

The common argument in support of ridesharing is that it reduces single-occupancy vehicles on the road, therefore reducing emissions. The logic goes like this: emissions will be highest if every individual has a vehicle and they drive in it alone. If fewer people own a personal car and instead request a ride from another driver, then emissions will be lower. The assumption behind this logic is that car ownership produces emissions. While yes, car ownership (i.e. manufacturing) does produce emissions, actual usage is by far the most important contributor.

Recent research has indicated that since very few ridesharing vehicles are electric, the services may, in fact, be increasing emissions due to increased idling and miles driven between ride requests. The ridesharing win-win is only truly achieved when trips are largely shared and done in the most efficient vehicles possible.

We should probably get one thing straight – although news about going carbon-neutral is great PR, we all know that the main mission of ridesharing companies (beyond making money) is not reducing emissions or saving the world. It’s improving transportation options.

So what can we do to reduce emissions from ridesharing, which is part of the largest polluting sector?

We’re seeing glimpses of the first strategy in Colorado, Los Angeles, and China. At the end of 2019, the Colorado Legislature reduced the cost of EVs for ridesharing companies so Lyft could deploy 200 electric Kia Niros. About a month ago, the City of Los Angeles teased the idea of mandating that all new ridesharing vehicles are electric. Many cities in China have already banned the use of gas vehicles for ridesharing, including Shenzhen, the home of China’s largest EV manufacturer, BYD. I know what you’re thinking – it all sounds a little Orwellian, but only if the dystopian society in 1984 was concerned about air pollution and climate change (wouldn’t that have been weird).

As for the second strategy to reduce emissions, ridesharing customers are already putting pressure on the companies to increase electric rides. According to a poll by YouGov, more than half of Uber and taxi customers in Europe are willing to pay an extra $0.15 – $0.20 per kilometer for a ride in a zero-emissions vehicle. That amounts to a willingness to pay about 13% more per trip.

What are ridesharing companies doing themselves to increase the number of EVs in their fleets? In some parts of the U.S., Lyft added a green mode to its app so customers can specifically request a hybrid or EV. In London, Uber released a “Clean Air Plan” that levies a small fee on every ride to help drivers upgrade to an electric vehicle. 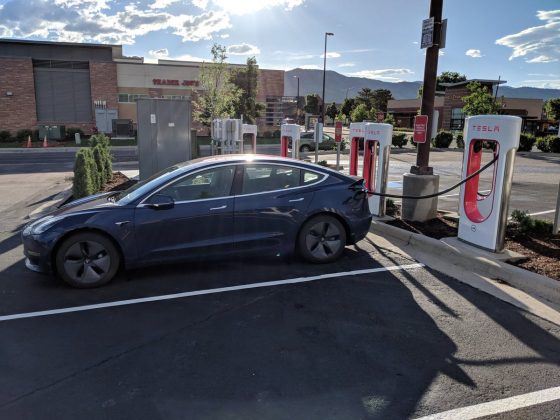 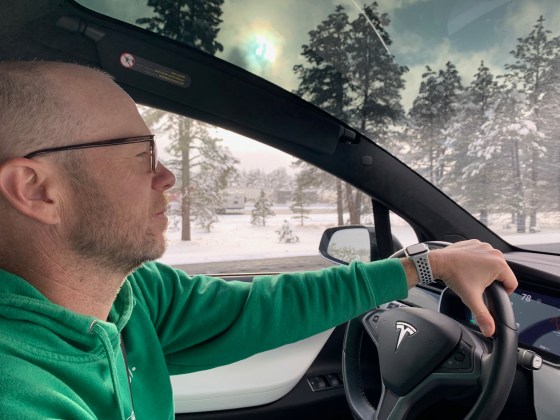 Tales From A Winter Road Trip In A Tesla Model X